(Full disclosure: As some of my posts tend to do, this one rambles. As, so, it should.)

I always tell myself that I am writing for the benefit of Mr. Kite. And also for Lucy. And Charlie. Little Charlie Bucket with his bucket of dreams, all riding on a pretty gold ticket and a mouthful of chocolate. BUT, most importantly, I must write for the fat lady.

Mr. Kite needs a benefit. He just does. And there must be much trampolining and hoops and garters. And horses will dance the waltz.

Mr. Kite tells me to be ridiculous. Whoever said writing is noble and pristine and honourable has to give their head a shake. Writing is a trip on a psychedelic bus. Mr. Kite reminds me to jump through hoops of fire and embrace the part of my brain that just plain doesn’t care about decorum.

And, Lucy. As a dweeby little kid I actually thought this poor girl had colitis. There she is, ‘the girl with colitis goes by’. But who am I? Of course she had kaleidoscope eyes. When I enter the world of creativity—the world where I must bring something that is mere mist in my mind to life on the fictional page—I’m walking in forests of tangerine trees. I’m on the lookout for falling marmalade. I’m waiting for a newspaper taxi to pull up to the bumper, baby. Lucy reminds me of the same thing Mr. Kite reminds me of—throw it all out the window. Just let the breeze in your thoughtscape bring to you what it will. Go with the flow. Sure, newspaper taxis get wet in the rain—but that never stopped Fred Astaire from singing. Okay, maybe he didn’t have to jump into one of those taxis, but the point there is—when you have rain, make applesauce. I think I’m mixing metaphors and mayhem today. I get that way when I think about Lucy & Mr. Kite. But, that’s the point…isn’t it. 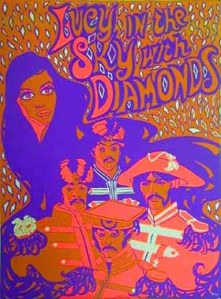 So, little Charlie Bucket, sad little boy. I write for him because we can all picture having nothing and wanting more. Well, except for Prince Pondicherry. When you have a chocolate castle, what more do you need? Charlie Bucket is in every character I write. He is their desire and innocence. My job is to either smack that out of them or give in and allow them to be fulfilled. So, in a way, Charlie is a sliding scale from which I can compare happiness. If my character is hopeless, clearly they are not going to find the golden ticket. They won’t even find the coin that will buy them the chocolate bar that will be enrobed in the golden ticket. 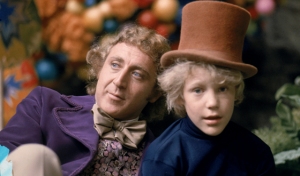 Once I have Lucy and Mr. Kite in my pocket, I am free to be silly when and while I write. Charlie allows me to gauge each characters’ emotional mood, their dreams, their goals—Charlie brings common sense to the table in a very nonsensical way. I mean, clearly Charlie Bucket would have no problem hopping into a newspaper taxi. You need to write for someone with their head in the clouds. These three people are really the same person, are they not? The father, the son and the holy ghost of who I write for.

And then we have the most important person of all! THE. FAT. LADY. Never stop writing for the fat lady.

Franny & Zooey is my ALL-TIME favourite book. Of all time. Seriously. J. D. hit this one so far out of the ballpark, nobody is ever going to get that ball and freeze it in a glass box for the mantle.

Before I get into WHY I write for the fat lady, I want to share my favourite F & Z quote:

“What? Who doesn’t? Exactly what don’t I think isn’t beautiful?” A minor groundswell sounded behind the shower curtain, as though a rather delinquent porpoise were suddenly at play. “Listen, I don’t care what you say about my race, creed, or religion, Fatty, but don’t tell me I’m not sensitive to beauty. That’s my Achilles’ heel, and don’t you forget it. To me, everything is beautiful. Show me a pink sunset and I’m limp, by God. Anything. ‘Peter Pan.’ Even before the curtain goes up at ‘Peter Pan,’ I’m a goddam puddle of tears.” ~ ZOOEY ( ZACHARY MARTIN GLASS) Franny & Zooey by J. D. Salinger

“I want an honorable Goddam skull when I die, buddy.”

Why do I write for the fat lady? Because Zooey told me to do everything I do for the fat lady. (& yes—I can read between the lines. I can guess that Zooey’s fat lady isn’t just that Christ guy, but also his drab little skinny shell of a momma.) I love allegories.

‘Seymour’s told me to shine my shoes just as I was going out the door with Waker. I was furious. The studio audience were all morons, the announcer was a moron, the sponsors were morons, and I just damn well wasn’t going to shine my shoes for them, I told Seymour. I said that they couldn’t see them anyway, where we sat. He said to shine them anyway. He said to shine them for the Fat Lady.’

WHO DO YOU WRITE FOR? Who you write for says a lot about what you write.

I write for the kids who are self-parented by library books. Who find the shelves and comfy furniture a haven, a sanctuary of safety. Who sniff the smell of book paper, and search for hidden treasures and answers to all their unanswered questions.

I write to find out where we’re going. I get in the car of the new story, and let the characters direct the twists and turns. If we step through a marshmallow puddle, so be it. If we drive off the road on the side of a mountain and wing extend from the car underbelly, so be it. If we trip and fall through the space between the pages without color or light, and find ourselves somewhere completely new, so be it.

I’m all in. I’m along for the ride. I write for the voiceless. I am their voice.

I write for language itself. I write for its beauty, the pictures it paints, the people who speak its words, the amazing stories it tells. Language is the mechanism by which trees are made of pretzels, the sky boils with red light, a child’s scream creates a new universe.

Shared experience, meaning and memory collide when language is used just right. And I love it.

Kevin, I didn’t even know what this was when I started reading (I didn’t read the title and I was kind of spacey at work). I just read with my eyebrows meeting in the middle, wondering what this post was about because I didn’t get who these people were–hence, spacey at work, slow on the uptake. It was just…whimsical. My brain felt like fireworks at an amusement park when I read your words. You should write magical realism. That’s how I felt, reading this post. Like this was some funky Francesca Lia Block story. Who I write for isn’t as cool and quirky as who you write for. That’s for sure. 😛

Caroline and Marie-Eve…love your replies. (-: Thanks!

I love this post, and get out of my head, OK?
I write for the story lost in the dark woods. The one that draws me in by way of snippets of music, a curve of the lip, a sway of the hip. It leads me deeper, like Hansel and Gretel, with shiny flashes of pictures instead of candy. I gather up these baubles and sweets and string them together. But once I’m finished it won’t let me leave even when the story’s done.
Sometimes I write for my heart with words pointy and sharp and sodden with tears. Memories and loved ones live on through the connection of my fingers on the keys, transferring images and feelings into words on the screen. Rounding out the points and edges with soft, knowing smiles dredged from the universal well of sorrow and yet cradle the meaning intact. Direct.
And sometimes I just write for giggles.
I love that you write for Charlie Bucket.

Such a beautiful comment, Dale! Thanks so much. Your understanding of the human condition and the craft of writing shines through here tenfold! Shine on, crazy diamond!

[…] instead of actually writing (which, when you think about it IS actually writing. #Winning), I wrote THIS POST on who I write for. I suspect I may have been high on the fumes of a certain passing […]

[…] about for me. While you’re dealing with the other questions, it’s also fun to ask the WHO YOU WRITE FOR and WHY YOU WRITE questions. Just for, you know, fun. These questions are all about finding […]