I don’t normally give my chapters titles. In fact, I have eight or nine trunk novels and I never once went with chapter titles. Some of those novels were written before Sebastian’s Poet and some were written after Sebastian’s Poet. I have no idea why I decided to give it chapter titles. I was at my first Muskoka Novel Marathon and I went in with a vague idea and nothing more (Each writer is allowed to bring a one-page outline into the marathon…but I’m not an outliner. My brain just won’t work that way). It was 2007. My first marathon. I was anxious as hell to begin it…could not wait for the horn signifying the starting gate to blow. I had a story percolating in my head. I needed to get it down on paper.

I wrote—distractedly—for 48 hours. Others stayed for the 3rd day of the marathon, but I had decided to only do the 48 hrs…skip the last 24hrs. I just couldn’t justify giving myself the luxury of a day off—just to write. I already felt guilty devoting an entire weekend to writing, even though it was for a great cause (Muskoka Literacy Council).

I got so into my story, I would have to stop at times because of the emotional turmoil I was experiencing. Sebastian was real. His father was real. His brother was real. And the man who one day simply just appeared in his living room—Teal Landen—my God, was he real! I wrote for no other reason than to find out what would happen to these people. And just before beginning every chapter, the hand of God would come down and hand me the next chapter’s title. That hand would say, ‘THIS is what you write about next!’

I don’t know where those chapter titles came from. Each one was a blessing that kept guiding me through that tumultuous story. I was so grateful to look on the fresh blank page of my MSWord document and see the chapter title appearing. It was as though my fingers were working independently of my brain. SO, I can honestly say today that I have no idea why I used chapter titles for this book. I know only that writing it drained me completely. I was literally crying while I typed the last chapter. Out of the blue, Gordon Lightfoot appeared to help celebrate the end of the novel and the next stage of Sebastian and Teal’s life. It was something else…to be at the helm of the story and still not know what was going on until the words appeared on the screen. It’s amazing what happens to a person when they sit and write for 48hrs…this thing takes over. They become WRITING. Writer is gone.

It was such a wonderful surprise to find out later that September that the marathon judges chose Sebastian’s Poet as the Best Adult Novel of that year’s marathon. Such an incredible honour…and honour I probably never got over. See, unlike other novels I had written before Sebastian…I had a sense that this one was special. Well, it was special to me. It hit a chord in me. It delivered me to that magical place where only athletes and those completely and inescapably lost in their passion get to go. It delivered me to that blurred reality where you are not there and there at the same time. You are just DOING the thing that you are doing…being the thing.

The story? It will have to speak for itself. Only those who read it will be able to judge it for what it is. It’s not my call to make. The writing of the story? Now that was something. The best writing experience I have ever had. In July, 2007, I escaped to a magical land…I found myself suddenly transported to the 1970s. And I had fun there. Lots of fun!

Here are the chapter titles I used for Sebastian’s Poet.

Musa Publishing will be releasing Sebby and the guys on July 6th. If you happen to pick it up, I’d love to know what you think of it. It’s the first story I ever wrote that seemed to actually write itself. 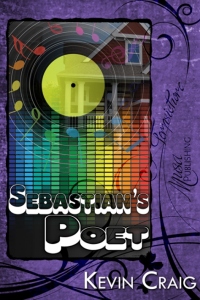