WOW! It’s the 1-year anniversary of the release of my second novel, SEBASTIAN’S POET! I can’t believe it. Where did the time go!?

It seems quite a few potential readers of Sebastian’s Poet are a bit worried the novella might be about a poet…or poetry. NOT THE CASE. (-: Turns out it may be a scary title for some. I can assure you, though, that no poets were killed (or harmed in any way…or uplifted in any way, for that matter) in the making of Sebastian’s Poet. The ‘Poet’ in Sebastian’s Poet is actually a 1970s folk singer. Teal Landen is his name and he is completely fictional. But I did ‘borrow’ him from reality.

Growing up, I had an ‘uncle’ who often spent the night on our couch. In fact there is one scene in Sebastian’s Poet that is directly autobiographical. This ‘uncle’ of mine was (is) a HUGE Toronto Maple Leafs fan. In the 70s, they weren’t quite as hot as that decade’s formidable Montreal Canadiens. There is a scene in the novella where Teal Landen talks hockey with the narrator, Sebastian Nelson (Nelson is a town in New Brunswick, Canada, where a lot of my relatives live. You will also find Nelson in my first novel, Summer on Fire. Nelson is the town that book takes place in). Teal would often bet with Sebastian on hockey games–Teal would take Toronto and Sebastian would take Montreal. Every morning, there would be a pile of change on the coffee table–Sebastian’s take from the bet. Because in those days Montreal always won. That scene was right out of my life growing up with an ‘uncle’ Gerald. I can’t tell you how many times his bets ended with him emptying his pockets of change. When they didn’t, my brother and I would still get a cash grab…there was always change inside the couch after Uncle Gerald stayed over.

In that way that writers have of making characters out of composites of many, I formed Teal not only as a tribute to my ‘uncle’ but also as a tribute to Leonard Cohen. Theft is SUCH a strong word. The character is neither Leonard nor Gerald…but there are glimpses of both in Teal. If you take recipe ingredients, smash them together in a mixing bowl–incorporate them into each other–you will have something new. Most often the new thing won’t resemble any of the ingredients. But the hint of those ingredients will be found in the resulting mixture. That’s Teal Landen. He’s part Gerald, part Leonard, part imagination.

I promise you…there is no poetry in this book. (-: It’s the story of a famous man crashing at this kid’s place…and of how involved he becomes with the kid and his family. And of how he changes the family as they change him. Teal just happens to be a Canadian icon. There’s even a scene where he does a duet with the real life Canadian icon, GORDON LIGHTFOOT.

If poetry scares you, give Sebastian’s Poet a try…it contains not a word of poetry. (-; 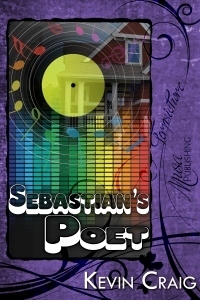 This novel was written during the 2007 Muskoka Novel Marathon – in a 48-hour period. It took home the BEST ADULT NOVEL AWARD for that year. (-: I’m heading up to the marathon in another 3 weeks or so. I have no idea what will come out of that marathon…but if it’s 1/3 as fun a ride as Sebastian’s Poet was to write, I’ll be more than happy!

Find out what others are saying about this book at GOODREADS.

Free and win are powerful words. How can I resist? I’m currently attempting to get through Reasons before MNM but still struggling with the subject matter and similarities to my own mother who suffered from mental illness most of my lifetime. A testiment to your talent in creating real characters true to the story.

Kevin I loved Sebastian’s poet. It seemed to me about a poet of the heart if not in fact of verse.

Lynne MacDonell Sent from my iPad

[…] FYI: I am currently holding a contest until the end of July — as part of the 1 year anniversary of book #2 SEBASTIAN’S POET. CLICK HERE AND LEAVE A COMMENT ON THE POST TO BE ENTERED TO WIN A PRINT COPY OF SP! […]

Kevin, you have inspired me to continue with my writing. I enjoyed the trailer for your book and although I have not read it, yet, I look forward to reading it soon.
Jeanette

Congrats on the anniversary, Kevin! 🙂 I loved Sebastian’s Poet when I read it — easily one of my favorite books to date. I bought The Reasons recently but have yet to read it… I’m looking forward to it!

Poetry or no poetry, Sebastian’s Poet is really something special. It’s one of those books that stays with you for a long time.

Thanks so much for all the kind words! So glad to hear when people enjoy one of my books. Truly appreciate it! (-:

[…] you’re here, I would love it if you dropped by THIS POST and left a comment. That’s all you have to do to be entered to win a print copy of […]

Seems like a great book. The little description you put on here about it reminds me of my uncles growing up too 🙂 All hockey and betting and change and cigarettes. Happy One Year Anniversary!

I only own Sebastian’s Poet on my kobo. I’d love a signed copy of my fav book by you (so far!)

I would love to add a copy of Sebastian’s Poet to my “Kevin-Craig-I-knew-him-when” collection. Pick me! Pick me!

Wow, you are now my cottage neighbour. We are on North Kahshe Lake Road. I visited the Novel Marathon, but didn’t participate.
My problem, I talk too much. Think I would have distracted everyone. Am eager to hear how you made out and what you wrote about this time? I’mElayne Burt and I call myself the Hungry Writer. (My friend told me that Starving Writer was too much) Looking forward to seeing you again, think me met quickly at the Marathon. : )

Thank you to everyone who entered! Elayne…I had a blast at the marathon! As a hungry writer, you should participate next year! It’s a great and enlightening experience! (-:

Fastidious respond in return of this matter with firm arguments and describing the whole thing about that.