I use the Orkian curse word because, well, I haven’t been a good Nanoer this November.

Speaking of shazbot, did you realize it was the last thing Bon Scott of AC/DC ever recorded. At the end of Night Prowler, he said, “Shazbot, Nano Nano.” And then, he blinked out. Imagine, telling the world to suck it in Orkian right before you buy the farm. “Goodbye, cruel world.” 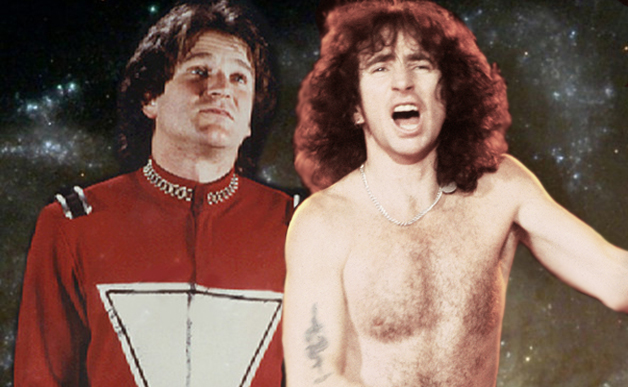 In ways, I’m disappointed in myself for not trying to nano more this month. But I also keep in mind that I finished a novel and submitted it to my agent at the beginning of the month. I did my Nano in October…in a huge way. And then I got lazy and justified my laziness with my October accomplishment.

How’s your Nanowrimoing going? Did you have a good story when you died? Enough to base a movie on?

I have been processing a lot. I feel another race to the finish line coming on with one of my perennially unfinished novels. I just have to get there. I have to get to that place where I feel the imperative of finishing . I am the kind of lazy that has to trick itself into action. I can go a whole eight or nine months NOT writing. But when I need to have a novel finished, nothing will stop the drive to get it done. The struggle is real. The hunger is real. I have been mapping the next chapters of my Camino de Santiago novel in my head for the past few weeks. Tweaking. Rearranging. The desk in my head is a hot mess. When I get things in order, I will be able to stream it through my fingers and on to the page. My Nano will happen when it happens.

Still, I like to make myself feel the anxiety and motivation of that November Feeling that NaNoWriMo has become for me. It’s the time of year when I force myself to feel the guilt of not writing, and to contemplate getting my BIC to write. I like the threat that the month carries. It moves me. If not to write, then to at least think about writing.

I’m winning NaNoWriMo. I can feel it. My word-count may tell a different story, but I have yet to figure out a way to count the words in my head. They’re there. They’re real. They matter.

As you continue to reach for that 50,000 word count for your 2016 NaNoWriMo, remember what the NaNo is about…motivating the writer. It serves as a reminder that time is valuable and that all you have to do to write a novel is sit and write. NaNo is about getting shit done. The real goal is to put Bum In Chair. Once you’re there…you can find a habit and carry NaNo with you throughout the year. Don’t make it about 50,000 words…make it about finding a home in your writing life. Make it about being kind to yourself and enjoying your writing life. Make it about telling a story. Make it about becoming friends with your inner-writer. Far too often, I see people talking about NaNo as though it were a war…I hear harsh words and self-hatred and self-shaming. Get over yourself and write. Shut the Negative Nelly up and put your bum in your chair and write.

30 days has November. This means that your daily goal to reach 50,000 words in the month of November is 1,666.666666666 words per day. If you don’t reach that goal every day, ask yourself if you wrote more words than you would have if it had not been NaNoWriMo. Ask yourself if you lived in your writer head that day. Put value on the words you imagined, even if you didn’t get them down. Don’t approach NaNo as though it were your enemy that you had to slay. Chill. Write. Or don’t write. Just be more WRITER.

Have fun. Embrace writing. Let’s be careful out there…