As 2018 draws to an end, I suppose it’s time for another one of those all-encompassing posts of reflection and upcoming things. It’s been an exciting year in several ways. Not the least of which was our trip to India and Nepal this past September. Hard to believe it was so long ago, but it’s been my experience that the BER months come in and out of existence in the blink of an eye. Just as they are the most dreaded months on the calendar for me, they are also the ones that race by the quickest. I suppose it’s the old tired year making that last ditch sprint to the finish line, eager to be done with itself. Maybe the year itself doesn’t even like its last few months.

2018 has been a year filled with writerly stuff, even though I feel I did so very little actual writing. I don’t know how that keeps happening, but it does. I think it’s the mark of a true charlatan to pull off something like this…to appear to be something you wouldn’t really be under close scrutiny. Does one have to constantly practice the art of the thing they brazenly call themselves to actually be that thing? Does writing need to take place before one can call themselves a writer? Who polices these things anyway?

But not everything is about writing. Sometimes a writer is merely a collector of memories. We meticulously store and catalogue the world in our unreliable memory banks so that we can access the information at a later date and spew it out inaccurately through our own renditions of truth and memory. We bury memories and unearth them later, tarnished and dented, and pound them into a slightly accurate rendition of what they really were when we lived them. Is that a close description of fiction? Truth in the lies…a crooked lens portraying something that could pass as plausible if we manage to suspend our disbelief and mis-remember just enough to cloud it all over in a whimsical world that wouldn’t accurately sit atop the one in which we actually live? Anyway…I lived some in 2018 so that I may write about it later… 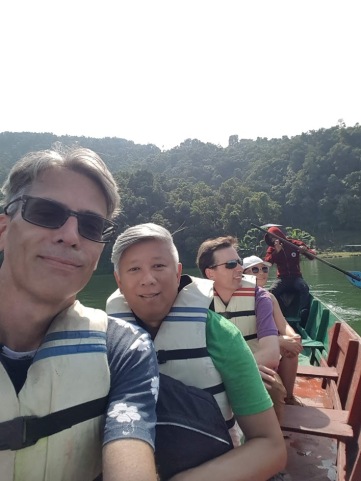 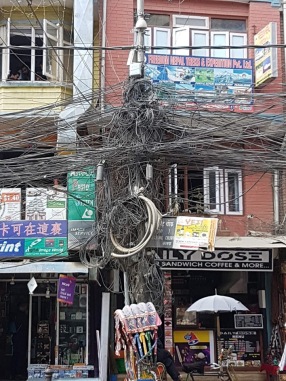 I believe we fell in love with Nepal in 2018. It was a little unexpected, but not a surprise. First it was Pokhara, with its simple orderly streets calming our hearts after the whirlwind insanity of the heart-breakingly beautifully chaotic streets of India. Don’t get me wrong, I could LIVE in the streets of India. The beauty stole my breath on countless occasions. But getting out of the bus in Pokhara was like releasing a breath I didn’t realize I was holding. It was a relatively calm environment juxtaposed against India. There was a new order we somehow didn’t realize we didn’t have up to that point in our journey. In Pokhara, we exhaled. The pictures above are mostly of Kathmandu, but the one with us in a boat was taken in Pokhara on a magical day when we climbed a mountain to see a gorgeous stupa majestically claiming the peak as its forever home.

Before Nepal, came INDIA. It was a lifelong dream of mine to visit India. I honestly don’t remember a time when I didn’t want to go there. I hoped I would eventually get there, but with most big ticket bucket-list items…one sometimes worries they won’t ever check it off. It being at the top of my list, I’m so happy to have fulfilled the lifelong dream. And we saw so much of it. Delhi, Agra, Jaipur, Varanasi…it was all beautiful, all breathtaking, all heartwarming. But the jewel, for me, was a place that had never made it to that childhood wish and hope and dream place of stepping foot in India. The jewel, for me, was ORCHHA. What a wonder. You can read about our time in ORCHHA HERE.

Yes, 2018 was a fantastic year for world travel. We had a blast. Even our own Ottawa, Ontario was a highlight for me. I had never been there, though it is only a few hundred kilometres away. Travel your doorstep…if you don’t, you’re missing out on some fantastic stuff.

Now, on to my WRITER life in 2018. I stepped up to the WCDR Board of Directors this year, as well…part of my writerly-stuff immersion. I am currently the Membership Coordinator for the writing organization. I recently sat on a panel at a WCDR Monthly Network Meeting, too. As an industry professional, if you can dig it. 2018 also saw the birth of NOVEL #6 for me! Though I signed the contract for PRIDE MUST BE A PLACE in the closing month of 2017, it hit the world in February of this past year. I also sold NOVEL #7 I WILL TELL THE NIGHT in 2018. It will see birth into the world in the opening months of 2019.

It wasn’t an entirely unproductive year for me. Two books placed and one looking for a home. I’m extremely hopeful of the one on submission. It was such a thrill to write…my baby. Oh, and I also began another novel…at the 2018 Muskoka Novel Marathon. I swear, if I didn’t do this once-a-year 72 hr novel writing marathon I probably couldn’t call myself a writer at all. It’s where I do the lion’s share of my yearly writing. That’s bad, isn’t it? That I could distill my entire writing year into 3 days? Ugh. I need more discipline. I need a more solid writing schedule. Do we still make goals for ourselves in JANUARY? Maybe my resolution should be to WRITE MORE.

I already know what’s in store for me in January, though. EDITING! I begin the editing process of bringing I WILL TELL THE NIGHT to the stage. I adore the book, actually…and I’m looking forward to working with my editor on it. It’s a shift from my recent spat of YOUNG ADULT novels…as it’s an adult contemporary. We shall see how this goes. I’m told it will be releasing sometime in the new year. I look forward to the arduous editing stage AND, even more so, to finding out how the publisher interprets the story into a COVER! Muse did a lovely job with my PRIDE cover.

Any more writerly things in 2018? Let’s see. I DID work on several short stories. One of which I published on Amazon and Kobo. LIGHT NEAR THE END OF THE WORLD is available to read. It’s a short story I set on the Camino de Santiago in Spain. The Camino is a passion and an obsession for me. I wrote several stories set on its sacred pilgrimage route to Santiago de Compostela.

I believe that rounds out the year for writing. In the new year, I hope to complete my 2018 MNM novel…though I’m not sure what I will do with it. It’s a middle grade novel and I’m not quite sure the world is ready for it. We shall see. (-;

Here’s to a wonderful 2019. May you reach your goals and set new and exciting ones. May you have some dreams come true and nightmares end. Whatever you seek, my hope is that you find it. Open yourself to possibility and wonder. I find it helps you to discover it. HAPPY END OF 2018!

Now go forth and pick up a copy of my 2018 novel PRIDE MUST BE A PLACE, if you haven’t yet done so. Really, it’s on sale at Amazon at less than the price of a latte. Also, you might actually enjoy it more…just click on the cover below…

One reply on “Thoughts on the End of a Year”

I love this! I really enjoy your view on being a writer. I agree. Who polices these things? Good read. Thanks for sharing!