For Pride Month, I’m giving away a print copy of PRIDE MUST BE A PLACE! To enter the giveaway, find me at Twitter and RETWEET the following TWEET before Midnight June 21st: 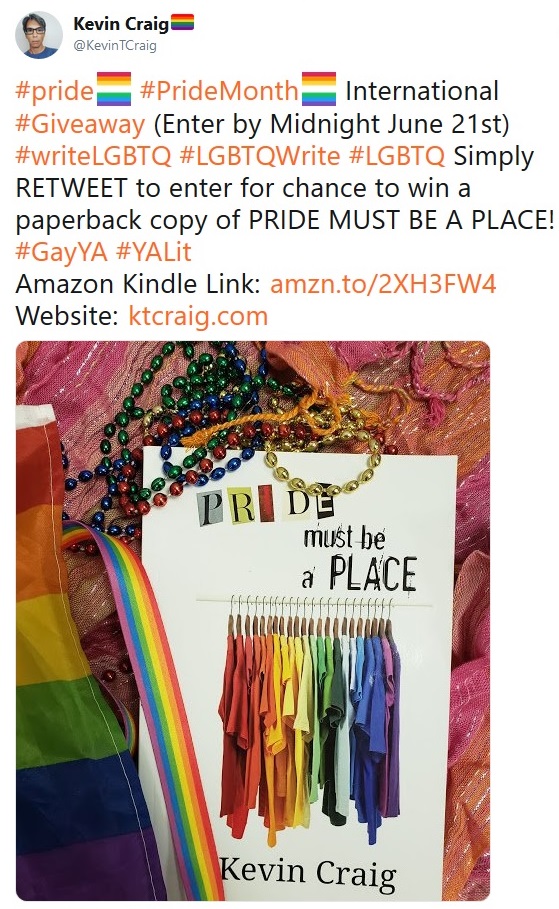 Here’s the synopsis of PRIDE MUST BE A PLACE from AMAZON:

Ezra Caine is gay. He’s sort of out at school but not at home, where he fears the wrath of his father’s bigotry. When Ezra’s flamboyantly out friend Alex Mills takes one too many beatings from homophobic bully Will Severe, Ezra finally snaps. Fed up with the situation at school, he decides to do something about it.
With the help of his BFF, Nettie, and some unlikely allies, Ezra rallies to create their small-town school’s first gay-straight alliance. The Rainbow Alliance Club is formed. But the changes don’t come without hiccups, one of which being a messy scandal involving Alex and a gay hook-up app.
As Ezra and his friends attempt to sway their school into an alliance of tolerance and acceptance, Ezra experiences a few surprises of his own on the home-front. He also learns the hard way that friendships out of convenience aren’t always a good idea, just as some enemies might not be as bad as he originally imagined them to be.

For reader reviews of PRIDE head on over to GOODREADS. You can also place it on your shelf while you’re there. (-;

You can purchase a copy on AMAZON