With all my Camino de Santiago talk, I’m afraid readers of this blog may begin to suspect that I’m a little bit obsessed. That’s okay. I actually am. And even more obsessed now that my novel, THE CAMINO CLUB, which is set on the Camino de Santiago, has a release date and is currently up for pre-order on Amazon. Obsessed and excited.

But if you think I can’t talk about–or write about–anything else, you’d be mistaken. 🙂 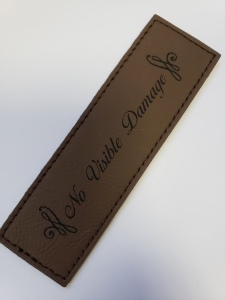 PLEASE FORGIVE THIS DIGRESSION—>The bookmark above was given to the participants of the 2019 Muskoka Novel Marathon. The back was left blank. My friend and fellow MNM participant, Colum, took my bookmark down into town and got it engraved with my WIP novel’s title, NO VISIBLE DAMAGE. I LOVE that Colum did this for me! The working title was THE ÉPOQUE OF ETHAN…named after the title of one of the character’s blog. But I had an aha moment while at the marathon. One of the characters did, actually. They dropped their laptop and looked at it and said something like, “No visible damage. Hey, that would be a great name for a band.” I was relating that story to Colum. His immediate reaction, based on what he knew about my novel, was, “THAT WOULD BE AN AWESOME TITLE FOR THE BOOK.” And so the title switch was born. He sealed the deal with the lovely gesture above.

Today, I’m at the point with my next novel where I begin to question EVERYTHING about it. I’ve shared portions of it with various beta readers, friends, fellow writers, etc. I’m at the point where it seems I need to pick my battles and find a hill to either die on or abandon. I’m at a crossroads. I’m confused. I’m uncertain. And I feel like I’m fighting for my non-binary character. And others like them.

The push-back on this novel has been strong. Don’t get me wrong…everyone was fully supportive. To a one, every reader thought it was a great idea to have a non-binary character. They all agreed that representation mattered…that having a non-binary character in a YA would be good. They envisioned potential young readers finding themselves in the story. It was celebrated with each reader.

I appreciate feedback. I love it! I make SO MANY CHANGES in my manuscripts based on the feedback I receive from my many helpful and generous first readers. But the more I think about it, I feel the more I should fight for this narrator. I just have a gut feeling that this should be a hill I die on. Who knows…it may not matter. The manuscript may never get finished. The pitches may never get requests. It may die before it sees the light of day.

The narrator for half the book (alternating chapters) is Cooper Mason. They have decided not to accept gendered pronouns. This is a character trait. They are going to keep this trait. If it kills any hopes for this book’s publication, I suppose SO BE IT. I have to think about Cooper and others like them. The reader will have to either throw the manuscript/book across the room OR get used to reading a narrative where he/she him/her are NOT used. I’ve decided. I will die on this hill, despite all encouragement and suggestions to the contrary. Cooper’s voice depends on this. They made this decision. Slight adaptations are the little nuggets that open the door to acceptance…to change…to normativity. We shall see what happens.

Now that I have made this decision, I’m hoping I can move forward in completing this novel. I feel like this sticking point is a little bit about what was causing my reluctance to dive in and finish the last 30 or so pages.

If you’ll excuse me, I have a hill to die on. I’m sure Cooper Mason is already up on that hill, showing their fierceness in that magical Cooper-ish way they have of demanding things be precisely the way they wish them to be.