My 6th novel will soon be available to readers! You can now pre-order the ebook on AMAZON, BARNES & NOBLE and KOBO!

PRE-ORDER PRIDE MUST BE A PLACE today and start reading on February 6th. You can get it for around $3. Click one of the links below to shop for the ebook in your favourite estore:

ARE YOU IN THE UNITED KINGDOM? YOU CAN PREORDER PRIDE HERE!

Ezra Caine is a Grade 11 high school student who happens to be gay. He’s sort of out at school but not at home, where he fears his father’s bigotry would be his undoing. When Ezra’s flamboyantly out friend Alex Mills takes one too many beatings from school bully Will Severe, Ezra finally snaps. Fed up with the homophobic tensions at school, he decides to do something about the situation.

With the help of best-friend-for-life, Nettie, along with some rather unlikely allies, Ezra rallies to create their small-town school’s first gay-straight alliance. The Rainbow Alliance Club is formed.

But the changes don’t come without hiccups. The biggest of these hiccups sends Alex to the hospital as he attempts to destroy the homophobic Will Severe with a scandal he himself created through a questionable gay dating app he shouldn’t have even been on.

Along with these struggles, though, come several signs the group’s efforts might just be the catalyst for change they desired. As Ezra and his friends attempt to sway the school into an alliance of tolerance and acceptance, Ezra experiences a few surprises of his own on the home-front. He also learns the hard way that friendships out of convenience aren’t always a good idea, just as some enemies might not be as bad as he originally imagined them to be.

My upcoming release PRIDE MUST BE A PLACE now has a cover! And you can add the novel to your GOODREADS shelf. It releases FEBRUARY 6th, 2018. Follow the link below to head over to Goodreads… 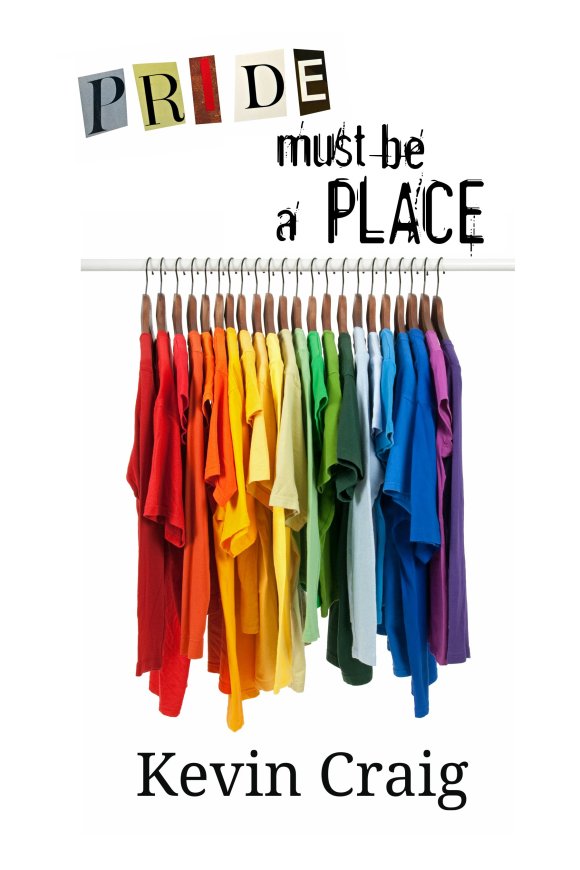 Check out this book on Goodreads: Pride Must be a place https://www.goodreads.com/book/show/36315117-pride-must-be-a-place

My 2015 Young Adult Novel, PRIDE MUST BE A PLACE, has found a home! It will be released on FEBRUARY 6th, 2018 by MUSEITUP Publishing. This is the publisher that published my very first novel, SUMMER ON FIRE.

Pride (#PMBAP) began life as my 2015 Muskoka Novel Marathon novel. I once wrote a blog post about it and how it was originally to be wrapped up with Lorraine Segato and how that plan changed as the novel awakened during the 72 hour marathon writing weekend in which it was born. The rest of the novel was written a couple weeks after the marathon when my partner and I went up to his sister’s cottage for the week. I would write a chapter, send it to my Kindle app and he would read it while I went on to the next chapter. And we took long walks while discussing what would happen next. It was a great week of writing and editing. I was so connected to the story this way. And it turns out he’s a great editor and story-talker. We worked well together. By the end of that week, the first draft of #PMBAP was completely finished.

Prior to writing the novel, I emailed Lorraine Segato of Parachute Club regarding the lyrics of their hit song, RISE UP. I felt the need to check on the possibility of using some of the lyrics even prior to writing…because I felt them to be an important part of the story. To my surprise, the generous Segato actually phoned me and we discussed possibilities for the novel—AS CHANCE WOULD HAVE IT, literally as I made my way to Huntsville to write the novel–I pulled into a Tim Hortons about halfway to Huntsville in order to talk to her. Her feedback was so helpful…I incorporated some of her suggestions into the story. Unfortunately, I think her feedback is what started the move away from her jumping into the story around the midway point. She helped to show what she would or wouldn’t say in the scenes I envisioned. I began to adjust and change in my head. Eventually, I thought maybe I was reaching too far and that their iconic song was enough. I’m hoping now that they will grant me the permission I sought out at the time. It’s been a couple of years. Those lyrics, used sparsely, but at integral parts of the story, will be sadly missed if not there. Fingers crossed.

I will be following up with more on this publication as details are made known to me. It’s early days. The contract has been signed and the publication is slated for February, 2018. Once the cover is revealed to me, I look forward to sharing it here! So thrilled to have this one see the light of day. I certainly hope you like it!

As novel titles go, I kind of like it. Pride Must Be a Place. I thought it spoke to the struggle my latest main character, Ezra Caine, dealt with in his journey to coming out and being out in his high school. Ezra, along with a couple old friends and some new ones, starts a gay-straight alliance club in his high school. Why? Because he’s had enough of the bullshit. Will Severe has attacked Ezra’s friend Alex Mills one too many times. Sometimes, the only way to have things around you change for the better is to create the platform and environment from which that change can eventually happen.

I think a great place to begin a dialogue that will hopefully bring about change in the landscape of the future is through literature. We, as humans, have been doing this for millennia. I have been dealing with YA issues for a few books, now…I thought it was time I tackled this particular issue. Like Ezra, I feel that it’s time for a change.

I wrote about half of Pride Must Be a Place at last month’s Muskoka Novel Marathon. It was my eighth such novel writing marathon. I went in with the hopes of some grand story wherein Lorraine Segato of Parachute Club makes a cameo at the end. I was even able to secure her blessing…not to mention the fact that she gave me some great ideas about what her ‘character’ would potentially do.

But then the inciting incident which would have opened the door for that ending wasn’t as big as it had to be in order to make that happen. As is often the case, the story got away from the idea and it went off on a tangent and changed wildly from the original vision. I had to admit to myself that the place where I brought the story to did not allow for Lorraine’s cameo. And it was going to be a legen–wait for it–dary cameo.

BUT! I did keep to the original vision that had my main character, Ezra Caine, obsessed with the 1983 hit RISE UP. That hit was an anthem for so many groups. It was Pride, though, that latched onto it in a big way. Ezra was called to action mostly because of the hassle his friend Alex was receiving at the hands of the bully, but also because of the power of the lyrics of his favourite song.

I finished the novel at the end of July. I’m excited about it…I haven’t yet had the time to worry over its scars and blemishes. It was one of the easier novels I ever wrote…the message was an easy one to write about. But I did face the most difficult challenge the YA author has when dealing with YA-issue story-lines. What’s that? Writing a novel with a message without beating the reader over the head with the message. People want to be entertained. Nobody wants to pleasure read only to find that they are being lectured to. It’s such a thin line to skate…harder when you’re close to the issue you are writing about.

It’s in the vault now…only time will tell if I treated it correctly.

For now, it’s on to the completion of other projects. I’ve had a lazy year and a half-ish. It’s time to finish the three or four other novels on the table waiting for my attention. With the success of getting this out of my system, I think I’ll be good to go on the next, and the next, and the next. To think…two short months ago I was considering the fact that I might be finished as a writer.

But I still have a few stories left to tell. Pride Must Be a Place is only one of them…