I feel like I should say the trip from New Delhi to Jaipur was harrowing, as the traffic is just as intense on the highways as it is in the city streets. But it did not feel harrowing at all. One quickly acclimates. The people running across six, seven, eight, ten lanes of highway traffic? I knew they would make it to the other side. Cows are sacred, so I knew they would be safe. Too many people on a motorcycle or scooter at once? None wearing a helmet? They had such faith in their safety that I too believed they would make it to their destination. The chaos has a rhythm that cannot be denied, and it is a beautiful dance to behold… to be a part of.

The road to Jaipur is filled with beauty. Mountainous hills, though maybe not quite mountains, abound. So many times I felt the desire to stop the bus, to climb to the top of these rolling hills with what I could only imagine would offer breathtaking panoramic views of the countryside about us.

It was a long drive. Some four or five hours. But it was not in the least unpleasant.

Coming in to Jaipur, the streets immediately became bustling and thriving. I saw the magic the cows wield for the first time, as we entered the city proper. In a busy intersection filled with trucks, cars, tuktuks, bicycles, scooters, motorbikes, and more not a vehicle moved. It was as though the air had been taken out of the world, and a chaotic still-life preserved in amber had been left behind. A cow sitting in the middle of the intersection had orchestrated a moment of stillness that was incredible to behold. This is the power a sacred and revered being holds over those who revere them.

Once in the Pink City of Jaipur, our guide Ranny took the ten of us for a walk through the streets. They were filled with people and smells and vehicles. We had found another impossible dance to become a part of. So quickly the scents changed. One can go from holding their breath against the smell of rotting food being gobbled up by a group of wandering pigs while being careful not to step in any of the waste about them, to experiencing mouth-watering sensations upon smelling the most tantalizing aromas of street food being prepared right there amid the riot of noise and smells! 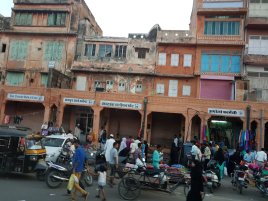 Our hotel here is a magic of its own. Bissau Palace Hotel. Gorgeous colourful rooms, a rooftop terrace where they will serve your meals from the restaurant below, and breathtaking architecture and furniture wherever the eye lands.

After the walk through the bustling crowds, we boarded our bus and we were taken to Amber Fort at night! A sight to behold. Just before we arrived we stopped for the last few minutes of daylight to see a palace afloat in the prettiest of lakes surrounded by rolling hills. Jal Mahal is a palace in the middle of the Man Sagar Lake. This sandstone palace is five stories, but when the lake is full four of these stories are underwater. It’s breathtaking to see the palace rise up out of the water and its mirrored reflection on the glass-like surface of the lake.

Before I take you to Amber Fort, which is very closeby to Jal Mahal, I need to at least mention the dance of kites. I don’t know whether it’s because we’re so close to Pakistan, or if it’s always been a custom here as well… but just before sunset the sky over Jaipur became alive with a cacophony of kites. What is a group of kites, anyway? Until today I did not consider a need for the term, but cacophony seems to fit. It was beautiful. Hundreds, no… thousands of kites dancing above the city! None were bright and joyous of colour. They were mostly just black. None danced arrogantly to show off wondrously intricate tails. None of them had tails at all. These homemade kites, flown by children, were there to send joy up into the sky above a city filled with struggle. The dance of the kites seemed to transform one’s thoughts on the city itself. So much joy in these simple black kites as they swooped and soared and dove and dipped. It took one’s breath away to see so many.

I only wish I could have captured them on film.

Next, the Amber Fort! We reached the base as nighttime arrived. We disembarked the bus and were escorted to open-backed jeeps…five to a jeep we poured into the back benches and held on for dear life. Squashed like sardines, we made the treacherous climb up the cobbled winding narrow street to the palace at the top of the world.

Once there, we met a lovely guide to took us to various parts of the remarkable huge and sprawling compound known as Amber Fort. It honestly seemed unending. 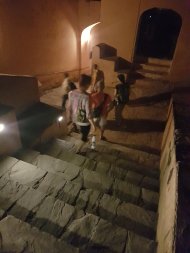 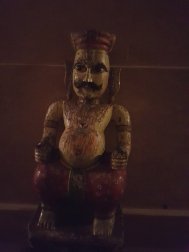 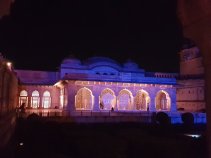 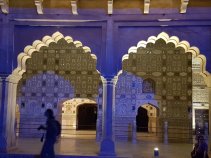 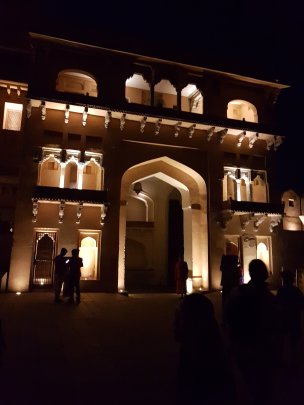 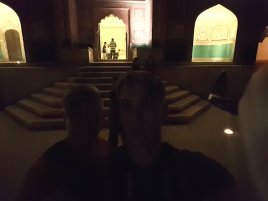 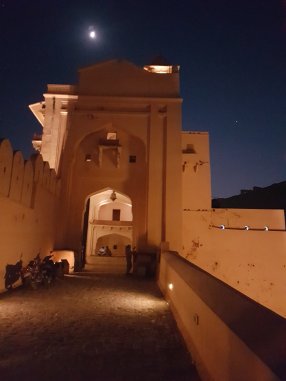 Another packed day tomorrow, which includes a daytime trip to Amber Fort. Ranny seems to have everything perfectly timed. There seems to be nothing he doesn’t consider when planning the itinerary. I’m looking forward to what comes next. And next. And next! And next!

It is a beautiful country! I’m in love

Enjoying your travel journal and the photos . Keep them coming.